Today we woke up bright and early to enjoy breakfast at 8:15 AM.  For breakfast, students had the option to eat cereal, scones, pancakes, and fruit on the side.  After students were done with their breakfast, they had class starting at 9:00 AM.  Luckily for students today, they had shortened classes because they were leaving early to go to Croke Park. After classes, everyone gathered their bags and prepared for the All Ireland Semi Football Final!  Students were bursting with excitement.  They wore the colors of the team they were cheering for and even painted their faces.

Once everyone was ready to show their spirit off, they all grabbed their things and got on the bus.  The bus ride was not that long; it was about 25 minutes.  This allowed us to point out things to students along the way.  As they entered Dublin City Center, Taryn pointed out the Guinness Brewery, Kilmainham Gaol, and Croke Park.  Students will get a chance to visit Kilmainham Gaol within the next couple of days.  Their bus driver then dropped them off and they walked to a nearby park and sat in the grass to eat their packed lunches.  Today their packed lunches consisted of a ham and cheese subs, Walkers (Ireland’s version of Lays chips), a chocolate bar, apple, and water.  Students enjoyed their packed lunches and chatted with each other while sitting in the shade under a tree.  However, they did have two accidents with some pigeons.  Unfortunately two of the students had birds poop on them.  Even though this grossed out the two students, others had a few laughs.  As Ava was yelling “I just got shat on,” a local Irish man walked by giggling and said, “Well it is not all bad,  because here it means good luck!”  Everyone thought this was pretty funny.

Once they left the park, they made their way to  Croke Park Stadium.  This was a little bit of a walk, however the streets filled with people wearing jerseys to represent their team.  There were people wearing blue and white to represent Dublin, and others were wearing green and yellow to represent Kerry.  Once students got into the stadium, Taryn got everyone checked in with their tickets and then they walked to their seats.  Students did not expect the amazing seats they got.  They were in the 4th row closest to the field!  Right behind the goal-they could clearly see everything that was happening.  The first match they saw was a minor match between Kilkenny and New York! Students enjoyed this match and were amped up for the next one.

Once 3:30 PM hit, it was time for the Senior match. Everyone in the stadium was screaming and cheering on their team as Dublin and Kerry ran onto the field for warmups.  When the match finally started, the crowd was on the edge of their seats the entire game because it was so intense.  This match determined not only who was going to the finals, but it was showing who was more likely to win the finals!  Throughout the game, students were joining the crowd when they cheered for their team.  Students were screaming, jumping up and down, and holding flags up.  Cooper, Joey, and Tom were screaming, “Up the Kingdom!,” while others were shouting, “Up the Dubs.”  Some of our students even got their five seconds of fame as the camera man panned to them and their faces showed up on the live screen!  After an extended game due to penalties, the game ended with Kerry wining and moving on to the All Ireland Finals!

After the game, a few of the staff asked students what they thought about the match.  Many of them said it was “cool, wow, awesome.”  Counselor Kylene mentioned that this was the best game she has ever seen.  After the match, the students hopped on the bus and then went back to King’s Hospital for dinner.  Since students had a long day, they got a night to relax and have some free time before bed. 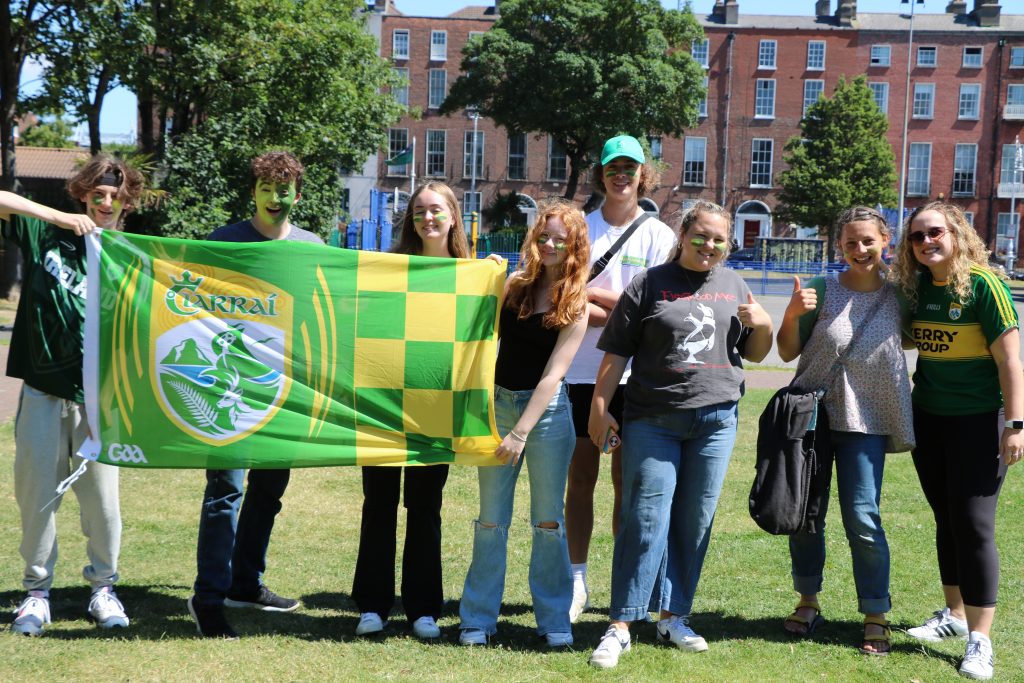 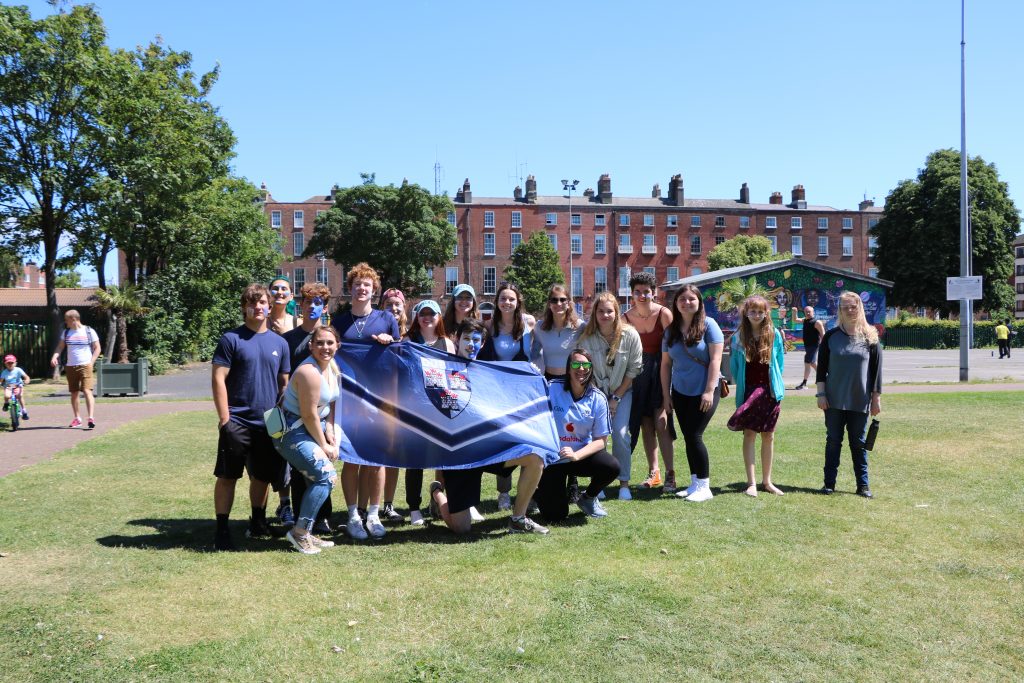 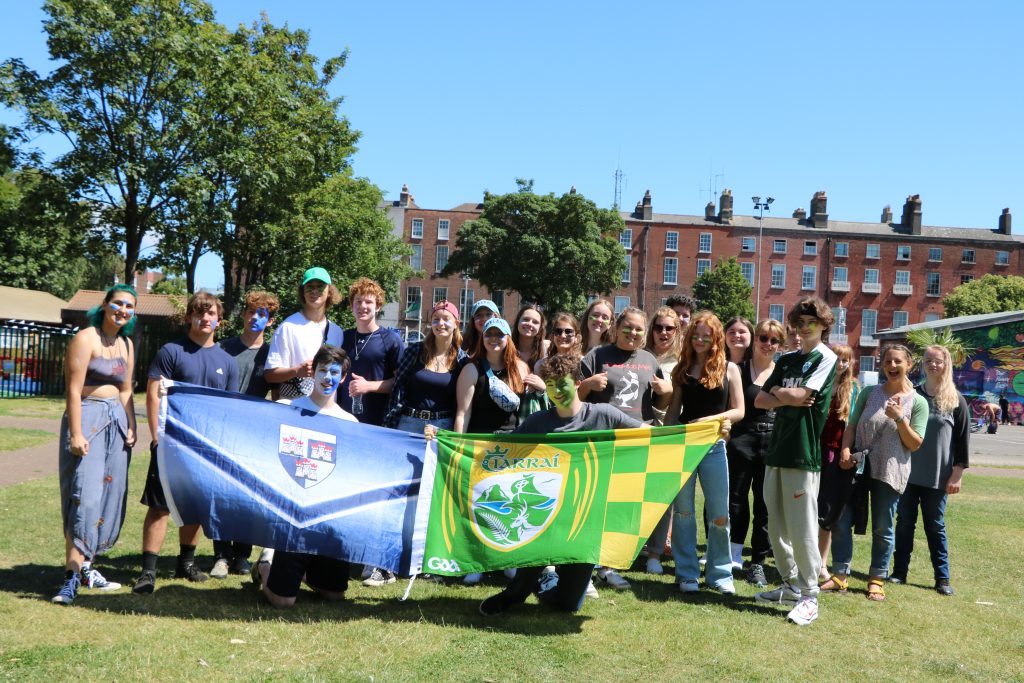 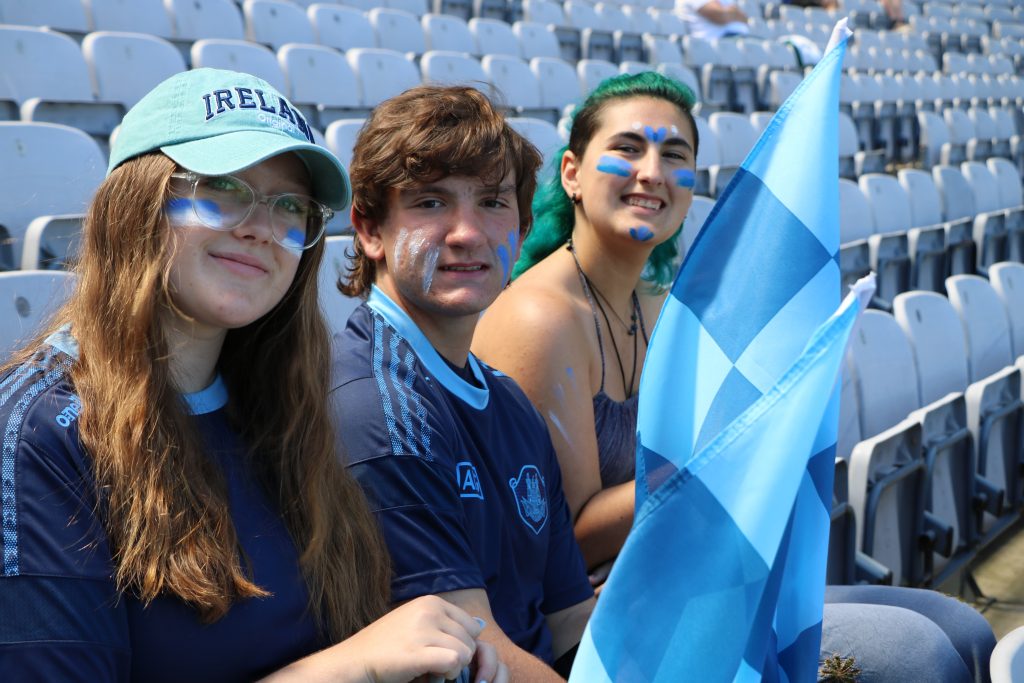 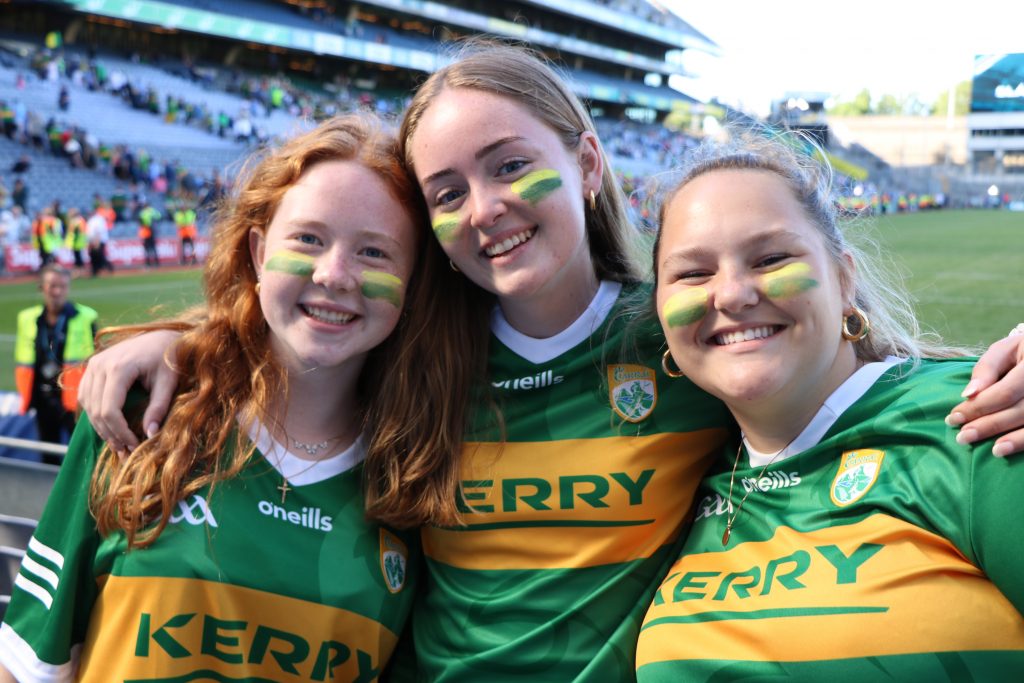