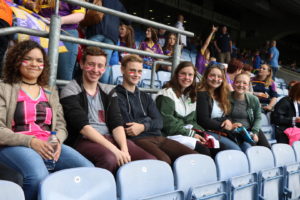 On Sunday, the students woke up bright and early and were served another delicious meal of fruit, orange juice, toast, and yogurt-all brekky staples on the Irish Life Experience.

They were then treated to a double class of Irish literature with Angie, where they would learn more about James Joyce and Ulysses. Hannah really enjoys Angie’s class, as she has dabbled with Irish literature in her own school back home in Illinois. 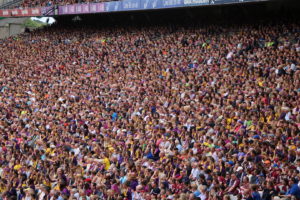 After class, it was finally time for one of our alumni’s favorite days of the Irish Life Experience. …The Leinster Hurling Finals at Croke Park in Dublin-Galway vs. Wexford. The majority of students decided that they would root for Galway (At the suggestion of Scones), while Anna, Aubrey, Rose, and Tippy would cheer for Wexford. The #ILE17 Group quickly boarded the bus-donned in their supporting team’s colors-of either maroon and white or purple and yellow face paint. 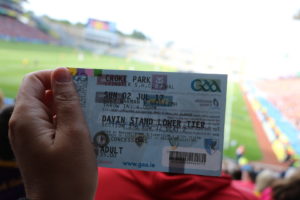 Once in Dublin and a packed lunch in hand, the group made their way to Croke Park through the maze of alleys. Croke Park seats 82,300 people and boasts that it’s the third largest stadium in Europe. Very impressive! This is the home of the GAA (Gaelic Athletic Association) and where Gaelic football and hurling would be played in Ireland. They also have a few periodical concerts there as well over the course of the year. 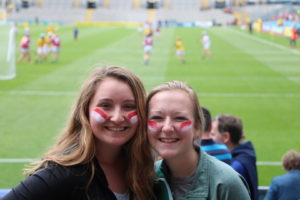 The students were in awe of the facility and happily ate their packed lunches of sandwiches and Tayto crisps with fruit and a granola bar. Deelish! Taryn has recently discovered adding crips to her sandwiches is quite tasty, so she was thrilled to try this again today.

The stadium was almost sold out, so the ILE’ers really got a good sense of the buzz that surrounds a hurling match and how passionate people are about their sports in Ireland. Michael shared the basic rules of the sport, so the students got the gist of game. “I could never figure out who was winning, but it was SO cool to watch,” said Rose. Rebecca also said it was neat-o to sing the National Anthem, as they had learned and practiced it in Irish the day before. 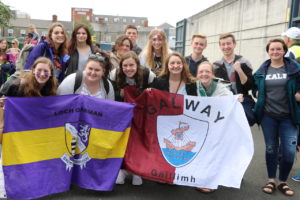 The first half of the game was neck and neck and everyone thought it was going to be a nail biter, but Galway stepped it up in the second half to pull ahead of Wexford and ended up winning the match with a 0-29 to 1-17 score. Peirce said he was looking forward to the hurling workshop on Wednesday and really learning how to play the sport. 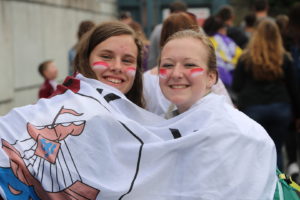 Once the match was finished, the students took a few group pictures and then stopped at King’s Hospital (Where the group would be staying in Dublin.) for a quick dinner of chicken and pasta. It was then back on the bus for the long bus ride back south to their home of Waterford for the next week. It was a fantastic day and the students had a blast!