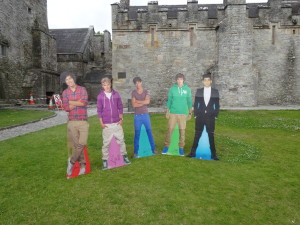 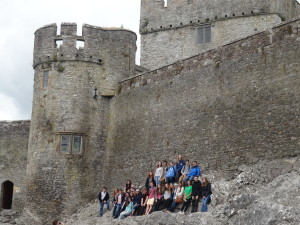 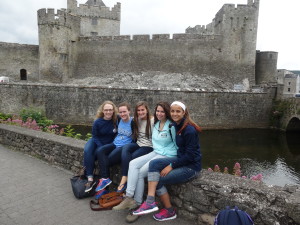 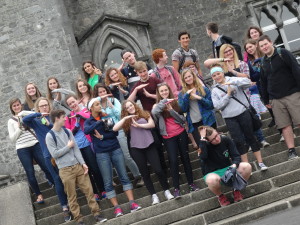 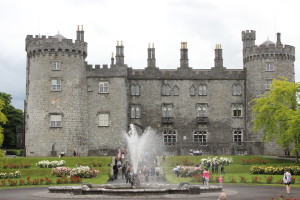 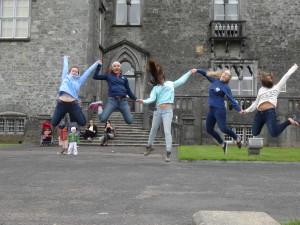 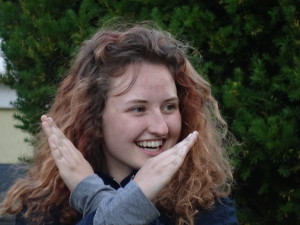 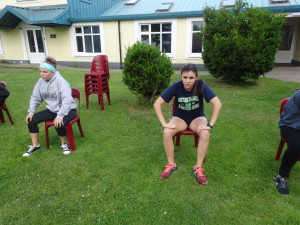 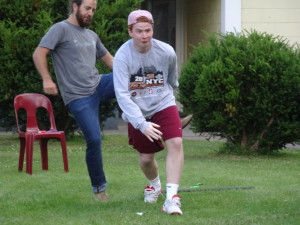 This morning we were up a bit earlier than normal. Breakfast was at half seven and our bus for today’s tours left at eight. The students didn’t seem to mind waking up early for tour day. As much as they LOVE their classes, everyone was looking forward to exploring more of Ireland, many now having a better understanding of Irish Studies, Literature and Irish-American History after a few class days.

Today we got to step back in time. Cahir Castle, which is nestled in the quaint town of Cahir, Tipperary, is 800 years old and was built on a fort which dates back to 300 AD. It is one of the most intact castles in Ireland, while many are left to fall to ruin, Cahir Castle had been owned and lived in by the Butler family for 600 years before eventually being given to the state in 1961. The last living owner, Richard Butler, died at age 94 with no male heirs to leave the estate to. Unfortunately, any female heirs had no legal rights to the property.

The climbing stone walls surround the living quarters, dropping down into the flowing river below, which was useful as the first line of defense. Other forms of defense include archer slots, which were used to pour boiling hot animal fat or tar upon intruders. Cahir Castle was only ever attacked one time by the British and was overcome due to artillery fire which had never been used in such an attack before. Students were able to see a canon ball which is still lodged in the side of the stone walls dating back to 1599!

After our guided tour the students were able to explore the castle on their own. Winding spiral stair cases and tiny halls made the vast castle seem small, especially since all 29 students decided to explore as one large group. The staircases were so narrow that lines of students would have to wait to pass up or down. Students tried to imagine what life would have been like living in such a stony cold place.

They were able to climb to the top of a tower which led to wonderful views of the town and river, a great spot for selfies with friends. Back in the court yard we even got a few pictures with our friends from One Direction, who seem to be following us around Ireland as we tour.

Sheila, Claire, Molly, and Counselor Casey practiced some Irish dance moves in attempt to get the perfect leap picture. They aim to have the perfect one at the next cool photo opportunity! They all took a few last minute photos on their way out of the swans in the river before piling back up on the bus.

The students piled back on the bus for a ride over to Kilkenny. They stopped for a quick moment to pass out their lunches and enjoyed the castle grounds before they walked down to get ready for the tour. As glorious as Cahir Castle was, Kilkenny Castle took their breath away! It has been totally restored and filled with everything that could have been found there, such as Chinese hand painted wallpaper, elaborate dinner place settings, full wall murals, and a great hall used for banquets and balls. It was a lot easier to imagine life here. And who lived in such a place? More Butlers, of course! The castle was built in the 1100’s and had been lived in by the Butlers until the 1930’s. The Great Depression took a toll on the Butlers and their entire estate was sold at auction to help pay their debts. The castle remained abandoned for 30 years. Over that time it slowly fell to ruins. When it was obtained by the state nearly every room had to be rebuilt, taking another 30 years to restore.

The tour was self guided but each room had a historian who filled our minds with visions of banquets, courtships, and interesting facts. The walls were three meters thick which could be seen if you stepped up to a window which had spectacular views of the grounds and rose garden. If you could smell the roses! The students were able to spend some time in the rose garden after the tour. The air was saturated with a sweet scent, like natural perfume.

From here we had free time to explore Kilkenny for a few hours. T hey came across things like street musicians-young ones at that-playing anything from traditional Irish songs to today’s popular hits. There was a farmers market today where a variety of things were being sold from fresh olives to flowers. Aiden and Kelton bought some fresh Wexford strawberries. A handful of lucky students came across the sweets shop which, ironically enough, was full of many American candies and foods like Lucky Charms Swedish Fish, Twinkies, (Which you can’t normally find in Ireland.). The river ran along the castle where locals dined and had tea. It was a beautiful day, weather wise. They lucked out with sunshine and even a few warm moments!

Upon returning to Newtown School the ILE had a lovely chicken dinner with apple crisp for dessert. They then needed their fuel because tonight was the 2015 ILE Counsellor Olympics! These games get pretty intense and competitive and everyone saw so much team spirit and effort! They played games like Human Tic Tac Toe, Bubble Gum Relay, Lifesaver Relay, Dizzy Bat Relay, and a Wheel Barrow Race tie breaker. Some memorable moments include Ben’s Dizzy Bat attempt-he ran as fast as he could to pick up the bat (Which was actually a hurly stick.) spun around as fast as he could keeping his head down. Once he completed his ten rotations he bolted as fast as he could to meet his team, BUT he pretty much bolted straight toward the ground. He couldn’t get up and opted to ROLL back to his team. The sight had everyone in stitches. Counselor Miley nearly lost his breath laughing so hard.

Each team put in a valiant effort, but in the end Taryn’s team took gold! The winning members received Kilkenny flags as their prize. Once the excitement of the Olympics had passed, the students were given free time for the rest of the evening. Most immediately gathered in “Lego Land” to use the WiFi to connect with family and friends back home. Some even FaceTiming friends and sharing their day.

The students all seem to be having a great time-loads of smiles and laughter, stories and friendships! We are so happy to be here and can’t wait to see what lies ahead on #ILE15!!