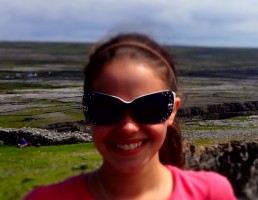 “I have decided that I am going to live in County Clare when I grow up.” That’s one of the first things I told my parents about my adventure on the Irish Life Experience. I completely fell in love with the area the day that we traveled to the Burren and the Cliffs of Moher, the way the mountains seem to just drop off into the startlingly blue ocean and the quaint beauty of the small fishing towns and sheep-dotted fields. It looked like paradise to me.

However, I can only ramble about my future home for so long, so the conversation inevitably turned to other aspects of my ILE summer. The people, the other students, and our counselors and teachers, really made the trip. I cannot begin to imagine touring Ireland without Angie singing and dancing to One Direction and ABBA on the bus, Dan exclaiming “Happy Days!,” and Taryn always jumping in with random tidbits she’s picked up and the (in)famous shirts. Then there’s Scones and Amy (Or should I say “Scomy?”) singing us our announcements, and Kevin almost getting his Waterford Walking Tour group lost. And I can’t forget Conor and Tyler constantly whistling, Petey providing extra hysterical lyrics to songs, Jenny “The Snake” hissing, impromptu jam sessions with Anica and Rachel, “The Dream Team” and their panda paws, Ann’s gigantic stash of candy, and so many more great memories. If you need any more proof of the closeness of the 2012 ILE Team, you need only find the pictures from our parting day and you’ll be sure to see traces of our tears, as we hugged each other in Dublin’s airport.

As much fun as it would have been just hanging out with the amazing people of ILE, we did have a mission in Ireland: To learn about and experience Irish culture and history. Our classes included Irish History, Irish Literature, Gaelic (Gaeilge), Irish American History, and Irish Studies (Which was essentially a giant mish-mash of fun facts.). The highlights of classes were presentations on Irish Americans, attempting to give some meaning to the last pages of James Joyce’s Ulysses, playing Twister in Gaelic, and Irish slang. We also had a quite a few laughs in our Drama and Dance seminars. Scones attempted to teach us some traditional Irish dances, but most of us had two left feet or too short of memories for the complicated movement patterns. For drama, each group had to write and perform a play about an assigned historical figure, most of which ended up being parodied almost beyond recognition.
When we weren’t trying to remember how to learn after the end of school, we spent many days touring Ireland. We saw everything from the bland and bare workhouses, to grand Kilkenny Castle, from the modern architecture of Croke Park, to the ancient Dun Aengus Fort on the Aran Islands and the natural beauty of the Cliffs of Moher and the Giant’s Causeway, to the impressive view of Dublin City from the Guinness Storehouse’s Gravity Bar. We even visited the new Titanic Museum in Belfast and saw the place where the “unsinkable” ship was built. I took so many pictures just trying to remember everywhere we went!

Of course, things weren’t all grand, to use an Irish colloquialism. Water problems plagued the trip through Waterford and Dublin, with both the boys and the girls getting their turn without hot water. Being Ireland, we also had a few issues with water from the sky, AKA rain. The infamous Irish weather threatened to drown us during our tours of Charles Fort and Waterford and canceled a hike, which got replaced with the Guinness Tour. But hey, it’s Ireland! I can’t really complain, especially since our last week was rain-free: Many people even got sunburnt during our trip to the Aran Islands! Who would’ve thought that would happen?

All in all, ILE 2012 was definitely the trip of a lifetime. I made amazing new friends, laid at the edge of a 330-foot cliff, touched the eastern side of the Atlantic Ocean, learned so much about Irish history and culture, bought an Aran sweater, played hurley and Gaelic football, laughed often, smiled even more, and had fun. Thanks for a great summer, ILE-ers!

I was kind of hoping that this trip would temper Mariah’s love of all things Irish, but alas it only fueled the fire. Her experiences will add to her imagination and writing abilities. Her horizons have been further expanded and her Facebook friends list has grown. We were so grateful for the assistance she received on her return trip when her flight was changed and your crew member stayed with her and got her onto another flight. Thank you to your entire ILE Team!