With nearly 100 years of combined experience leading students and groups to Ireland and all over the world, the Irish Life Experience team has the knowledge and the “know-how” to make each and every student’s experience an unforgettable one. Nearly all of our team members have once participated in our summer study abroad program in Ireland as students and have continued on to lead groups and become part of Ireland’s only fully-integrated, cultural, and academic program for North American students.

This combination of experience and knowledge guarantee an exciting educational trip for any student.

Hailing from Polson, Montana, Taryn was bitten by the travel bug at an early age. At sixteen, she had the opportunity to participate in a summer study abroad program in Ireland. After graduating from college, Taryn served as a Peace Corps volunteer in Kyrgyzstan. Before being evacuated after 9/11, she worked in a small Muslim village teaching English to 5-11 graders. Upon returning to the States, she decided she needed a change of pace and moved to Ireland for a year, where she immersed herself in the tiny town of Camlough, Co. Armagh. Since her return to the States, Taryn has been taking high school and college students to Ireland for over 22 years. She has dedicated her life to sharing her knowledge and love for Ireland with young adults, combining education, travel, and fun. In her spare time she loves spending time with family and friends, hiking, running, skiing, singing, traveling and cheering for Gonzaga basketball.

Born in San Francisco and raised in Minneapolis, Bryan is now settled in Boston with his wife, five children, and two dogs. Bryan is the President of Tenon Tours, one of North America’s leading tour operators and the official travel partner of the Irish Life Experience. Bryan met Taryn through Vinnie Lewis (Below, no relation.) who assured the two that they were a match made in heaven, sharing a passion for enhancing lives through travel. Vinnie was right and they’ve been thankful for the introduction ever since!

-I was born in Belfast, Northern Ireland-home of the famous ship that sank.
-I was educated at St. Dominic’s High School in Belfast and University College Dublin.
-When I was a child I wanted to be a Charlie’s Angel.
-I actually become a teacher.
-Worst job I’ve ever had was dressing up as an elf to do marketing for a drinks promotional company.
-Best job I’ve ever had is working with the Irish Life Experience.
-The bravest thing I’ve ever done is a parachute jump for charity.
-The stupidest thing I’ve ever done is a bungee jump the day after I graduated from college.
-I’m very bad at walking in stilettos.
-I’m very good at falling over when I walk in stilettos.
-I’m most proud of the work of the Irish Life Experience and the students who come every year-they never cease to amaze me.
-The last book I read was “The Snowman” by Jo Nesbo.
-My favorite movie is Casablanca.
-The song that makes me dance is Dancing Queen by ABBA, as the Irish Life Experience students will know this from our bus rides.
-The best place I’ve ever been is Boston. I was there in March of 2012 for an Irish Life Experience Reunion and it was fantastic. The people are friendly and the city is beautiful.
-If I could describe myself in five words, they would be funny, hardworking, honest, loyal, and sociable.
-If I could invite five people-living or dead-to a dinner party, they would be Jamie Oliver (A famous chef.) for the cooking, Des Bishop (Irish American comedian.) for the craic, Taryn Harrison (From the Irish Life Experience.) for being one of my best friends, and Spike Milligan for the stories and Bob Dylan for the music.

Based in Ireland with over 24 years experience in leading student groups. 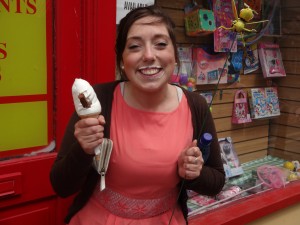 Born in Cork, it was only natural that Shona started playing GAA from a very young age training for both local Camogie and Gaelic football teams. Shona’s interests gradually changed to Irish Dancing and over the years has gone from strength to strength competing in championships worldwide. Shona spent her summers growing up in Gaelcholaistí (Irish language summer schools.) on the southern coast of Ireland. Having spent so long being a student, Shona began working for a Gaelcholaiste in County Kerry. Having met Taryn through Tenon Tours in 2011 Shona jumped on the chance to get involved in the ILE and is beyond excited to teach Irish to this year’s students and give them the same experience that Irish students get each summer.

When not busy with ILE, Shona teaches university students in a range of subjects. She is eagerly awaiting more summers, where she will get the chance to meet many more ILE students and help make this experience unforgettable for them.

Originally hailing from New Jersey, Vinnie left the Garden State for greener pastures-two of them actually. It began with a study abroad experience at the University of Limerick in Ireland, which exposed him to life in the Emerald Isle and a passion to share travel experiences with others. Upon returning, he worked at StudentCity.com during the year and spent his summers as a Counselor extraordinaire for the Irish Way Program and the Irish Life Experience. After eight years of living the dream, he finally settled down outside of Boston, Massachusetts. He is married to the lovely, Jenna and they are looking forward to coming to visit the Irish Life Experience in the summer, with their daughter Maeve, and another bundle of joy on the way.

“I found myself in Ireland. It has helped shaped who I am and what I hope to be.”